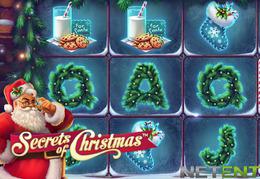 Net Entertainment has had a lot of different releases so far in 2016, and they are capping it off with a timely holiday title. Their new Secrets of Christmas online slot gives players an opportunity to play across five reels, three rows and 25 paylines of Christmas-themed action with a chance to win a little gift of their own for the holidays.

Details on This Slot

This new Net Ent slot gives players a few different ways to win some sizable payouts. The main feature in this title is based on free spins, and you'll get to sit back and watch the reels go while your winnings pile up in this game mode. There are also plenty of symbols and graphical motifs that fit into the Christmas theme with Christmas trees, Santa, gingerbread houses, snow, stockings and more. Every aspect of this game pulls together over the holiday theme, and the release in early December is perfect timing.

Something any player who is familiar with the online slot industry can tell you is that all major software providers tend to have at least one, if not more, holiday-themed slots. Instead of just throwing something together for the sake of having Christmas-themed games, Net Entertainment has build a very solid title based around great gameplay for this release, and it's a good example of how they focus on quality over quantity. Players will enjoy this game all year long because it doesn't just rely on its theme to give players something to look forward to.

Net Entertainment has had an incredible year in 2016. They've released some of the most popular games available today, including titles like Guns N Roses, and they've won multiple awards for their work in this year alone. This is all a part of a history they've built for themselves of being considered one of the top software developers, if not the single best one, in the industry as a whole. They're capping off 2016 with Secrets of Christmas, but they're sure to hit 2017 hard with a ton of momentum that comes from all of the great things they've done this year.

Press Release, NetEnt Gets Into the Festive Spirit With Launch of Secrets of Christmas netent.com, December 1, 2016