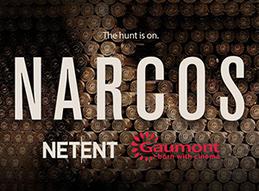 Net Entertainment has been making quite a bit of news so far in 2018, and it seems like they've only been getting warmed up. They've put out yet another big announcement about an upcoming game, and this time it's in the form of a slot based on the hit television series Narcos. The series is produced by Gaumont Worldwide, the oldest film company still running today, and NetEnt has made a deal with them to turn the show into an online slot.

Something really interesting about this particular announcement is that there's already an enormous audience built-in who are familiar with this show. The reason for that is that it's one of the top five shows in the world right now. Because it's available through Netflix in more than 130 countries, it has a pretty huge international appeal with fans all over the globe. This translates to a big audience who would likely jump at the opportunity to get in on the action themselves with a Narcos online slot.

What to Probably Expect

No particular details about the upcoming slot have been released so far, but there are some major things we can probably expect from this game. Whenever NetEnt makes a game based on a popular television show or movie, they generally make it feature-based. This is because they can tie in so many different elements of the brand into the game through these features, and the regular pay table normally takes a bit of a backseat in this way. It's also the case that these games typically have a medium level of volatility, more or less, which makes it exciting enough to keep casual players around without being so much smooth sailing that it becomes boring to them.

NetEnt has been running since 1996, giving them more than two decades of experience. They are currently one of just a few companies at the apex of the online casino software development pyramid, and there are few developers who share the same level of success and popularity in terms of the quality and quantity of the content they have produced. With the upcoming Narcos slot announcement, they're showing that they're still a beast to be reckoned with in 2018.