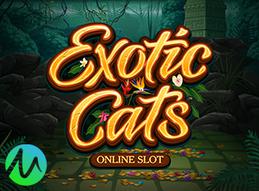 It's no secret that Microgaming has tons of great releases each year, but the ones that tend to get the most attention are usually those based on big brands or that have some kind of fancy approach to them that seems more like a gimmick at times than something that will last.

Their newest title, the Exotic Cats video slot, is neither of those things, but it's still looking like it's going to be a big hit with players. Keep reading to find out why.

The wild symbol is the best-paying symbol in this 243-ways slot, and it shows up on each reel. On top of that, each of the five reels has a cat symbol assigned to it. It can be the lion, tiger, cougar, panther or leopard. These five symbols all tie for having the second-highest paying combinations in the game as well.

However, whenever one of these five cat symbols lands on its respective reel, it turns into an expanding wild symbol that stretches out vertically in both directions. In an all-ways format game like this one, that means that tons of wins can happen very easily, especially if you get more than one of these on the grid at the same time.

While the main pay table and regular gameplay is enhanced a great deal thanks to how these cat symbols work to turn into expanding wilds, there's even more where that came from. This title also has a free spins bonus round, and during that round, a different set of reels are used that give you even better chances to hit a big win.

Microgaming has started making their push to end out the year on a strong note, and that's what they've done every year with the holidays coming up. This momentum will allow them to start into 2019 with all cylinders firing, so to speak, but until then, we're looking forward to the releases that they have coming like Exotic Cats and whatever else will be coming our way between now and the end of the year.