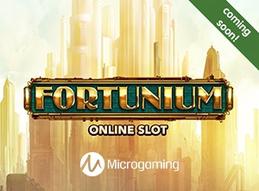 Microgaming unveiled a new 5x5 slot at ICE Totally Gaming yesterday. The game is called Fortunium and will release later this year. The video slot has a steampunk theme and the main feature is its mystery symbols, depicted on the reels as question mark icons. Clicking on the symbols reveals low, high, and wild symbols on the 25 reel position slot. Players also have the option of activating a "Win Booster" to supercharge wins by changing the underlying icons into only high and wild symbols, without any lower paying symbols.

The main characters in the game's narrative are Maximillion, an industrious inventor, and Victoria, an acclaimed explorer. Both symbols can appear 'super-stacked' filling all five visible positions on their respective reels.

Microgaming made a big splash with the game's preview, changing the Microgaming bar at the event into a steampunk themed watering hole. The temporary decor featured a geared up ice cream buggy in the style of the genre. The rolling machine was plated with copper and gold and served up nitrogen ice cream for the day.

The buggy's themes were 'Opportunity' and 'Wealth' and the comestibles included a salted caramel whisky ice cream and a gin and tonic sorbet. Each menu placard featured one of the main characters from the game. People lined up through the great exhibition floor to get a peek at the new game concept and have a taste of opportunity, wealth, or both. Many affiliate managers used the bar for their primary meeting place on the big show's second day.

A Microgaming spokesman said: "We're very proud of what the game studio has created with Fortunium, and we can't wait for this game to launch later this year." He also mentioned that they would reveal another exciting game on the last day of the show. On the first day of the three-day event, they revealed Playboy Gold, created for them exclusively by Triple Edge Studios under license from Playboy Enterprises Incorporated.