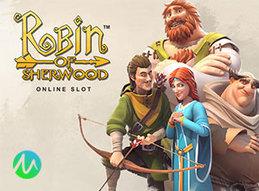 The newest title available on the Microgaming Quickfire platform is called Robin of Sherwood. This is a title that's obviously based on Robin Hood, but it looks absolutely amazing with extremely high-quality graphics. That's not surprising considering it's developed by Rabcat, the same company that brought you titles like Dragon's Myth and Castle Builder.

What Robin of Sherwood Has to Offer

The Wild Turning feature is one of the main features that players will see during their gameplay, and it's activated at random. The way this works is that Robin Hood will signal his men to shoot at random spots on the reels, which will turn those symbols into wilds. This obviously adds a lot of chances for extra payouts that you would have missed without the feature, but it also makes it much easier to pick up the bigger five of a kind wins that really pile up and add to your account balance.

A Royal Clearing Feature can also be enabled during a free spins mode. The way this works is that Robin Hood will eliminate the lowest card rank symbols from the reels to help you get better payouts since there are fewer remaining symbols on the reels with more of them having higher payouts. We like how they've put together this free spins mode because it stands out from what's more typically available.

Rabcat produces some pretty tremendous games. They don't put out a ton of games each year, but it's extremely rare for them to have a release that does not get a lot of attention in the industry as a whole. They are trend setters in more way than one, and their releases often set new standards and trends that a lot of other providers try to follow and copy.

So far in 2018, Microgaming has really been building up the slots side of their Quickfire platform with programs that have added exclusive relationships with certain providers. However, they also have been getting awesome releases like Robin of Sherwood from companies like Rabcat that have worked with them for years. That means their game selection is becoming even more incredible with lots of new titles being released each month.

Press Release, The Quest is On in Microgaming's Exclusive July Addition microgaming.co.uk, July 3, 2018