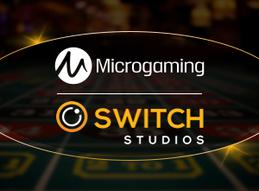 For around a decade, the gold standard for table games in the online casino world has been Microgaming's "Gold Series" line. While these titles were on the cutting edge when they were developed, and while they still hold up well now, they are several years old to say the least.

This is one of the reasons why they have signed an exclusive agreement with Switch Studios for the purposes of providing high-quality table games with the goal of shaking up the entire industry.

The First New Game in Line

The first title coming as a part of this deal is Roulette, but it's not just your standard roulette game. Instead, it's a 3-D title based around life-like physics to give the game a great look and feel. It's actually based on a game engine that hasn't been used for anything else so far, and it's also optimized for mobile play on smartphones and tablets.

What to Expect in the Future

In the future, we can expect more titles of this level of quality and detail with lots of options to customize the player's experience. For the Roulette game, for example, players can adjust their displays from racetrack to traditional table layouts. There's a lot of room for improvements to graphics and interfaces in the traditional table games, and we expect that the additions that are being made to the Quickfire lineup will be the new gold standard for years to come.

This announcement is the perfect way to start winding down 2018 for Microgaming. They've had a lot of great things that have come out of the past 11 months, but this one shows that they are serious about all sectors of the casino industry and not just with building up their collection of slots. This approach of making exclusive deals with content providers like this is looking like it'll work out extremely well over the long run for building up the Quickfire portfolio and keeping things fresh, and this deal with Switch Studios is just another part of that.