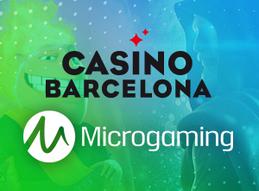 The Microgaming Quickfire platform is known for hosting games from a variety of top-level casino software companies like Endorphina, IGT and Rabcat (in addition to plenty of others), and that makes them a very attractive software package for a lot of online casinos. They've recently inked a deal that will have their platform used by Casino Barcelona Online, which will put their titles in front of lots of new players.

For this new deal, content will be shared from the entire Quickfire platform. This includes all of the slots from dozens of third-party providers on top of the hundreds of Microgaming-powered titles that will be included as well. Tons of table games, video poker and other types of games are included in the mix. It's a great selection of titles that their players will definitely appreciate, and it's the sort of thing that can be a real game changer for any site out there.

One aspect of this deal that's pretty important is the mobile side of things. The Quickfire platform has an extremely flexible mobile platform that allows access to hundreds of titles, most of which are some of the most popular slots out there today. With that having been said, these games can also be played on lots of different mobile devices. Tablets and smartphones can be used regardless of screen size and largely regardless of operating system, which is really important considering how many different types of devices are out there on the market. Android, iOS, Blackberry and plenty of other types of mobile options can be used to play with this platform.

Licensed in Spain, this site is owned by Grup Peralada, a very important company for gambling in the country. They have operations in a number of Spanish-speaking countries, including Uruguay, Chile and Argentina. They're a major name in the industry, and it's fitting that they have the online arm of Casino de Barcelona, a particularly prestigious European casino known for being one of the top options on the entire continent. They've definitely made a good step in adding the Quickfire platform to their online operations, and those games are very fitting for such a high-end operation.