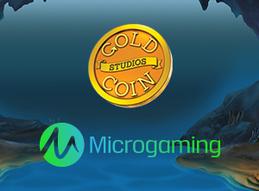 Microgaming has expanded its list of gaming providers as the Isle of the Man-based provider, has signed an agreement with Gold Coin Studios. The young studio was established in 2018 and has already launched numerous games on the Microgaming platform such as Arthur's Gold, based on the legendary story of King Arthur, Aquatic Treasures, Bushes Sushi, and The Animals of Africa. It is run by a team of experts who have decades of experience in the online and land-based casino industry. Its 'fifth launch is Silver Seas, a fearless pirate adventure that features Microgaming's EpicStrike mechanics where a silver coins scatter symbol is most valuable in this online slot that has 5 reels and 3 rows where players can generate with a help of extra spins, a maximum potential award of 6000x the bet!

Gold Coin’s next title to be launched is Treasure Tracks on July 8, and the studio announced that they will release more content this year!

Andrew Booth, Director of Games at Microgaming, said: “Gold Coin Studios have already given us some great games over the past year since they joined Microgaming. I’m looking forward to seeing them continue to cement their place in our roster of exclusive studios.”

Microgaming is a leading online gaming casino operator with decades of experience in the online gaming industry. This brand is licensed in the United Kingdom and the brand operates from Douglas, the capital of the Isle of Man. With an excellent team and experienced staff, it has been releasing premium games every year since its inception in 1994. Its popular games are Jurassic World, Halloween, Microgaming Roulette, Classic Blackjack, and more. The company also participates in the PlayItFoward, which is a program focused on the development of education, charity, and sports. The company has received numerous awards over the years, and it was listed in the Guinness Book of Records for the largest jackpot in the history of online slots.