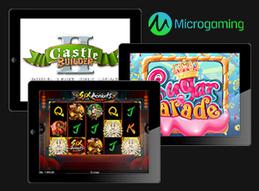 New releases are a very important part of any online casino software developer staying relevant, and that's exactly what you get with Microgaming on a montly basis. They've been around for over two decades, and they've stayed at the top of the mountain by consistently giving players something new to look forward to. They have three new July slot releases that are sure to keep this pattern going.

The first new game, and the one that will probably get the most attention, is Castle Builder II. This game will be available via their Quickfire platform, and it's based on a long storyline of exploring 15 different kingdoms where you have to come up with the parts to build castles. There's a ton of gameplay involved and a lot of replay value with over 100 in-game achievements to be earned along with 75 different castles to build. You'll speak with more than 300 characters in what is one of the most in-depth online slots to ever be released.

Aside from that, the other two games are Sugar Parade and Six Acrobats. Six Acrobats is based on a Chinese acrobatic show, which is like a Western circus. Free spins and chances for multipliers as high as 25x show that there are ways to win big in this game. With Sugar Parade, you'll get 15 paylines with a chance to win 10 free spins with a 3x multiplier. This is a bright, exciting and colorful game with lots of sweet opportunities for big payouts.

The competition in the online slot developer space is greater now than it has ever been. This means that Microgaming is having to pull out even more big titles with great graphics, gameplay and features to stay in the top tier of software providers. A big help to that is the fact that they run the Quickfire platform, which is one of the most popular platforms in the industry right now, and it includes games from some of the best third-party providers in the industry. Rabcat is a great example with Castle Builder II, especially considering the original Castle Builder was nominated for EGR Game of the Year in 2013, one of the biggest awards a slot can be given.