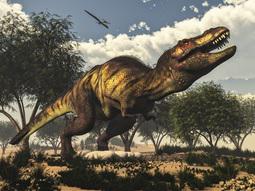 In the world of online slots, Microgaming is known for bringing some of the biggest brands in television and film to the reels. One of their biggest releases was Jurassic Park, based on the hit movie by the same name, and they've acquired the rights to produce a Jurassic World slot as well. This was the fourth-highest grossing movie in history up to this point, so it's clear that there's going to be a huge audience. If it sees anything like the success of their original Jurassic Park slot, then it could very easily be one of the top releases of the year.

At this stage, nobody really knows much about what's planned for this game. The Jurassic Park game is available at online sites that use the Microgaming software, however, and you can look to it to get an idea of how they'll likely handle this game as well.

Jurassic Park was a 243-ways format game, and while that was one of the favorite formats for Microgaming titles for a while, they've recently pulled away and started releasing games with more traditional formats in the 20-payline and 25-payline space, so it's hard to say which way they'll go with it. With their Game of Thrones slot, they actually had a dual release of a 243-ways and 15-payline version, so we could see something like that as well.

The real story with Jurassic Park was the bonus features. There were tons of features that had clips and characters from the film, and the visual appeal of the game overall was widely praised. Overall, we can expect a feature-packed title that has a lot of content from the movie, but we don't really have any idea what kind of layout they'll use.

Microgaming has a lot to accomplish in 2016. After a really good 2014 and 2015, they have a lot of momentum behind them, but they have some stiff competition. NetEnt in particular is trying to challenge them by stepping out with their NetEnt Rocks series, and Microgaming is going to have to answer in a major way if they want to really contest who the top online slot provider is in the industry.