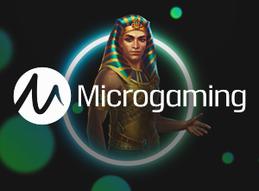 Once again, Microgaming has a wide range of new online casino games that will further expand its gaming library. More than 15 new games have been announced for this September and one of the most popular titles ever, Mega Moolah, is due to be launched at the end of the month.

Kicking Off the Month with Many Exciting Games

The supplier kicked off a new month with the release of Cossacks: The Wild Hunt. This adventurous online slot is developed by Foxium and the game will offer many bonus features and an RTP of 96.19%.The God of Fire slot will launch on September 9th and will be equipped with the ultraways mechanic and an RTP of 96.02%.Jurassic World: Raptor Riches Riches will take players to the exciting world of dinosaurs where players are invited to generate high payouts. The game was developed by Fortune Factory Studios and will offers immersive themed features.

Perhaps, the slot that everybody knows well and the game that holds the record winning payout of $19.4 million, Mega Moolah, will have another edition called Mega Moolah The Witch's Moon. This low volatility slot will offer a Mega Jackpot that starts at $1,000,000! The game is planned to be released on September 30th.

4 Diamond Blues Megaways will be launched on September 16th. This game was developed by Buck Stakes Entertainment and is the latest addition to Microgaming's Megaways line of games. Other titles that will join its vast library include Ascension: Rise to Riches from Gong Gaming Technologies, and Lucky O'Mega. On September 14th, Just For The Win will launch Big Boom Riches, while SpinPlay Games will debut online slot Alice at WildLand.

More on the Leading Developer

Microgaming is a leading online gaming casino operator with decades of experience in the gaming industry. It has released premium games every year since its founding in 1994. The brand has won numerous awards over the years, and in 2015, the company was listed in the Guinness Book of Records for the largest jackpot in slot history.

Source: “Microgaming lights up September with a host of rich new content”. September 9, 2021.