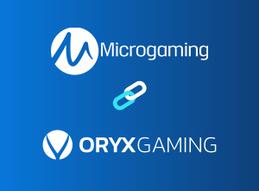 ORYX Gaming has signed a new deal with Microgaming to see its content released on the leading supplier's aggregation platform. According to the contract, ORYX’s RGS portfolio contains unique developed games by the best product studios, including Gamomat, which will be available to its latest partner’s consumers.

Gamomat has over a hundred titles, created only for ORYX, with special features like jackpots, that have been confirmed to be incredibly favored by punters. Top-performing titles such as Ramses, Crystal Ball and Ramses Book will be accessible on Microgaming's platform. The latter delivers a supreme content collection platform, supplied in more than 20 regulated international markets, allowing ORYX to expand its game reach.

Matevz Mazij, Managing Director of ORYX Gaming, said:“Microgaming is one of the leading names in the industry and its aggregation platform features the best content on the market. We are delighted to now add our proprietary and exclusive games to its existing offering and to reach new audiences.”

Leon Thomas, Commercial Director at Microgaming, added: “Microgaming is delighted to partner with ORYX Gaming, who offer an extensive collection of engaging games from innovative and creative studios, such as German online premium game developer Gamomat. The addition of exciting titles from ORYX further diversifies our content offering for customers worldwide.”

More on the Partners

Microgaming was founded in 1994 and was the first company to deliver software for an online casino. The provider is a leader in the market, designing games and providing its software for over 300 casinos all over the world. All casinos are paying into the same jackpots, and this brand provides a massive range of related progressive games, which allows them to deliver the biggest online jackpots.

ORYX is a giant iGaming platform that supplies casino games and video slot content from many software providers. Its first steps were taken in 2010 and the provider is focused on developing games to be fast, responsible and secure to maximize user experience. It operates in Malta, Romania, Estonia, United Kingdom, Croatia, Czech Republic, Serbia, Spain, Schleswig Holstein (Germany), Colombia, Slovenia, Sweden.