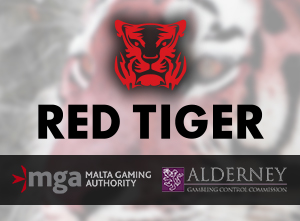 Licensing is extremely important in the online casino world because there is no international level of standards that are applied across what is definitely a global industry. The closest we have right now are regulatory bodies and the reputations they have individually. Red Tiger Gaming recently increased their value by getting licensed by two important jurisdictions: Malta and Alderney.

While the license from Malta is more important and more respected than that from Alderney, it's not so much that the AGCC license is meaningless as it is that the MGA license is just so critical. They are widely seen as one of the two most important, strictest and most serious licensing bodies for online slots and other online casino game developers, and for Red Tiger to get their approval along these lines is a pretty big deal.

What These Licenses Do

On a practical level, these licenses allow Red Tiger Gaming to offer games in more jurisdictions than they were before. Beyond that, they go to show that this developer is serious about adhering to important standards like the ISO 27001 certification they received just weeks ago. This puts them in a position to end 2018 on a particularly strong note and to be ready to jump into more heavily regulated markets coming into the new year. These regulated markets are where they'll be able to see some real strategic expansion beyond what they've already done.

Red Tiger Gaming has been running since 2014, and they offer some great online slots. Their progressive slots are particularly interesting, and they also have some behind the scenes mechanics like their bonus management application that gives operators a lot of cool things to work with.