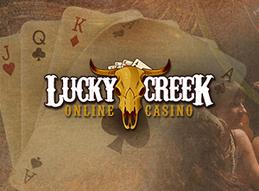 When any company has been around for a while, they occasionally need to freshen up their look and overall product. This goes for online casinos as well, and that's something that Lucky Creek Casino took upon themselves to do recently. They have completely revamped everything about their presentation and promotions with a complete relaunch of everything they have to offer online.

The first change that players will probably notice is that the logo has been completely changed. While they are sticking with their roots of being a Western-themed online casino site, they have created a more modern appeal with how they go about showing off this identity. Aside from the logo, their website has changed as well to give players a much more accessible view on all of their games. You no longer have to jump around to different sections of their site to see what they have to offer. Instead, it's available all in one place for an easier level of navigation and control.

While this site has always had a solid welcome package and seasonal promotions, they decided that this was not enough. They've kicked things into another gear with new promotions that will come on a regular basis. A good example of that is 6 Shooter Monday, a promotion that happens every Monday and that gives players a chance to get more value 52 times a year. There is more on top of this one particular offer, and the idea is to give players something new to get excited about.

Lucky Creek Casino's recent changes have not changed their excellent game selection. They have around 160 titles in total on their desktop platform thanks to the Saucify software package. This also includes around 60 mobile titles that players can access on their smartphones or tablets, and that allows them to take their play with them anywhere they go. It's a pretty flexible platform that works on a variety of computers and mobile devices, and with a solid game selection and plenty of new promotions, it's easy to see why a lot of players would want to check them out.