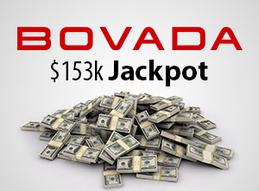 Let 'Em Ride is a style of table poker that gives players a lot of control over the amount that they end up wagering as a whole. Bovada Casino offers this game, along with many more table games, and one lucky player scored big with a six-figure win recently. Check out how this player won such a big amount on a table game.

How This Payout Was Won

There were two major hands that led the lucky winner Sonny D. to his six-figure payout. In both cases, he started out with three of a kind after betting the maximum of $500 per hand. In this game, you start with three hands and have the chance to raise or fold with the chance to see two more cards to complete the best five-card hand that you can. Sonny picked up four of a kind on both of those hands, and that's enough to score a really large win on each of those hands worth more than $75,000 apiece. Combined with other smaller wins, he was able to take down a total profit of $153,500.

Let 'Em Ride is so different in terms of other casino poker games because it gives players a ton of control over the final size of their bet. You can end up wagering a total of three times your initial stake after seeing your first few cards, and that gives you a lot of strategic real estate to work with. Learning to play the game perfectly takes a lot of work, but it's not quite as complicated as something like blackjack or video poker.

If you look back through our news archives, you'll find a ton of examples of Bovada Casino turning lots of players into major winners. They run up big jackpots on a number of their slots, and they've made major winners from table games several times in the past as well. This history of giving players major scores is a part of their popularity, and their great game selection and flexible interface help with that quite a bit as well.