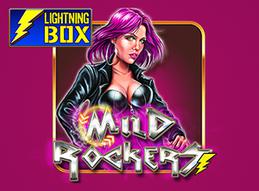 Lightning Box has a good reputation for putting out titles that get players excited, and their latest announcement is no exception. The Mild Rockers online slot is set to give players an action-oriented experience, and it has a healthy dose of sex appeal in the process with a leather-clad main character who is there to rock out and help you to get some big wins.

What Mild Rockers Has to Offer

This game has a whooping 80 paylines across six reels of action, and it uses a diamond-style layout to stand out from what's considered the usual thing in the online slots world. You'll be able to pick up an Encore Spins feature where the mild rockers turn into wild rockers to give you even more winning combinations for better payouts. The rock girl in leather is an important symbol in this game as well, and she combines with these wilds to make it even easier for tremendous payouts to come your way.

Something interesting about the timing of this release is that this software company has been putting out games that are getting play both online and in land-based arenas. This means you could actually end up seeing Mild Rockers in a land-based terminal at some point, which brings the fun to you in multiple ways. With a focus on mobile as well, there has never been a time where you had more flexibility with how you could enjoy new releases from companies like this one that are known for producing some extremely high-quality content.

Lightning Box, formerly Lightning Box Games, has been in action since back in 2004, so they have well over a decade of experience. They're based in Sydney, Australia, and they are primarily known for their inclusion on the Microgaming Quickfire platform among most online players. The two founders of the company are former names at International Game Technology and Aristocrat with more than 40 years combined experience, and it's easy to see how that experience came together to produce such tremendous games both online and in the land-based sector. Overall, the new Mild Rockers slot is just another example of what they're capable of giving players.