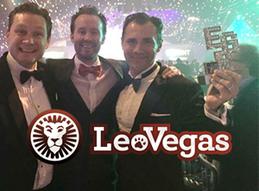 LeoVegas Casino is a site that virtually all players and industry professionals have heard of, and one of the reasons for that is that they do such a great job in what they offer and in how they take care of their players. The group that runs this site has recently been recognized for this work in a major way thanks to taking down the Brand of the Year honors in this year's EGR M&I awards.

What Makes the Brand of the Year

To win this award, you have to consistently be on your A-game for a prolonged period of time because you're up against hundreds of other names in the industry who are all trying to get that top spot. The only way that you can beat them is to be consistent and to be solid across every aspect of the player experience on every level. They were able to do that, and they've done that for quite a while, so this site is definitely deserving of the award.

LeoVegas was able to take down two other awards in the EGR M&I ceremony. They picked up the Affiliate Marketing Campaign of the Year award, and they also picked up the prize for Innovation in Mobile & Tablet. The latter of these is particularly important because it shows that they're focusing on the future in a major way. More people are playing via mobile than ever before, so focusing on those players and making it easier and more intuitive for them to enjoy what this site has to offer is obviously important.

LeoVegas is based out of Sweden, and they're known for being on the forefront of several sectors of the industry, which includes their work on mobile platforms. They've been wildly successful with big brands like LeoVegas Casino and Royal Panda Casino under their belts, and they are listed on the Nasdaq Stockholm market. This is a great company that has done a tremendous amount of work to get to where they are today, and they are more than deserving for the Brand of the Year award and their other prizes at this year's EGR M&I awards.