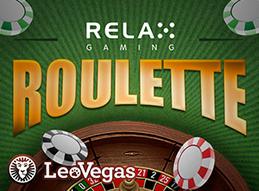 Something that's interesting but undeniable about the online casino industry is that most of it is dominated by slots. This is in terms of what's popular among players but also the number of games available. You rarely hear about new table games coming out, but new slots come out all the time and largely dominate the news cycles. A new deal between LeoVegas and Relax Gaming stands out specifically because of this.

Relax Gaming has some new table games coming to LeoVegas as a part of this new deal. This software company has their own RNG that's used for their super high-quality table games that adds a bit more realism to the presentation of the games and how they are played. For example, in a new roulette game, the ball movement is particularly realistic instead of just following a simple pattern. It's details like these that make the games stand out compared to what's available in the industry now as a whole.

You'll find that there are a lot of different styles of blackjack out there at casinos, but this new one gives players a feature that a lot of people ask for: the ability to play multiple hands at once. You can play three different hands with ultra-realistic gameplay at the new blackjack tables provided as a part of this deal. It's an exciting time if you're a fan of these types of games, particularly if you want to get in on a ton of action with up to three hands of blackjack at once.

Moving Forward in the Industry

We find it very interesting that Relax Gaming has put so much emphasis on a sector that doesn't get much attention in terms of growth and new ideas, and we also find it interesting that LeoVegas was so interested in making this deal happen. They've shown in the past that they are forward-thinking, and we think that moves like this could catch on to push the industry forward as a whole in terms of providing players a higher level of quality in their table game experiences. We like what we're seeing here, and it goes to show that live dealer games don't have to be the final frontier for classic titles like roulette and blackjack.