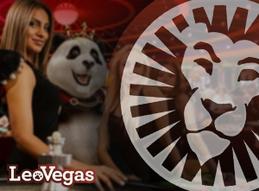 LeoVegas AB released their third quarter interim report yesterday and also announced that subsidiary, LeoVegas International Ltd,  has signed an agreement to purchase Royal Panda Casino along with other assets of Malta-based Web Investments Limited for the sum of 60 million euro (about US$70m).

The sale is expected to be completed on December 1, 2017. The purchase agreement also calls for another €60m to be paid out in one year if the casino meets certain performance targets, mostly based on UK revenues. The deal would then be worth some €120 million.

LeoVegas Casino is a multi-platform online casino with great strengths in the Nordic region as well as the rest of regulated markets in Europe. The casino is also available in certain "gray" markets such as Canada. Royal Panda is performing extremely well in the UK and adds regional strength to the Stockholm traded LeoVegas AB. Overall, Royal Panda saw year on year Q3 revenues up more than 60% with over half of that attributable to UK customers. Earnings before interest, tax, depreciation, and amortization (EBITDA) for the period are expected to be just over €3m.

LeoVegas AB historically operates from a strong cash position which they used for this purchase. In order to fill their "war chest" back up and to complete future acquisitions, the company also announced that they have secured €100 million in new financing, €40m of which is in the form of a revolving credit facility.

In order for Web Investments Limited to receive the earn-out of an additional €60m, Royal Panda needs to generate a minimum of €50m in Net Gaming Revenue over the coming year with EBITDA of at least €15m. The UK market needs to account for €34m with at least €5m in EBITDA.

LeoVegas CEO, Gustaf Hagman commented on the deal, saying: "With the help of the strong symbolic value in the panda, the company has built a premium brand among gamers, and we will complement LeoVegas with Royal Panda. This gives us two great brands with global appeal, which makes the scalability in the continued growth strong while strengthening our position in the UK," according to company press releases Wednesday.

Both casinos have great strengths in the mobile sector, including live dealer games, and both are dual-licensed in the United Kingdom and Malta, with LeoVegas also approved for business by the Danish Gambling authority.