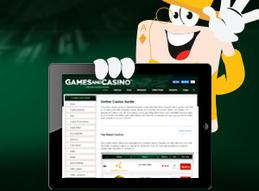 The recent purchase of gamesandcasino.com adds another spoke to latestcasinobonuses.com network wheel of gambling affiliate sites. The original founder Dominque of GamesandCasino sold the site in the beginning of this year but due to the magnitude of the site the new owners felt strategically it was best to sell. LCB accustomed to running a massive operation was more than qualified to take on the new venture.
Dominque, considered somewhat of a celebrity within the gambling affiliate community and highly respected for her outstanding work in standing up for the rights of affiliates is credited for the development of basic terms and conditions that have set industry standards for affiliates.

LCB intends to keep the spirit of the site which Dom and her late husband spent so long to create (since 2002) but will bring it up to date with a new design, improved user interface, updated information, detailed Casino reviews and promotional exclusives that they are so famously known for in the gambling community.

Branching out since their first conception of LatestCasinoBonuses in 2006, the company has grown into a network of affiliate sites and has become a leader in the online gaming industry.

Integrate the rich history of founder Dom who was instrumental in paving the way for affiliates and the LCB network who has an impressive history of their own; the acquisition of GamesandCasino can be summed up in one word – success.