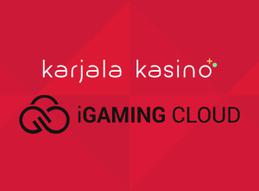 iGaming Cloud has recently announced that there will be an upcoming launch of Karjala Kasino, a Finnish online casino site. This will include a ton of huge promotions, one of which gives players 1,000 total free spins. These are given out over 100 days, and while it's obviously a retention measure, it's still a total of 1,000 free spins that are being given to players, and that's not even all of it.

Yet Another Big Brand

This site will be the 43rd running on the iGaming Cloud platform, and it includes well over 500 games in total. The interface is set up to be as intuitive as possible, so players don't have to worry about feeling like they're getting lost in the sea of hundreds of games. On top of that, players will be able to connect via desktop or mobile devices, including both smartphones and tablets. This is because their interface is particularly accessible, and it's a great thing because it lets as many players as possible in on the action.

Karjala Kasino will be in great company with a ton of other sister sites, some of which are some of the bigger brands in the industry. That list includes names like Betspin, Rizk, Guts, Kaboo and Thrills, all of which have gotten great reviews from players for how fair they are, how great their promotions are, how good the customer service is and how many games they have available. It's an awesome bit of company to be in, and to be the sort of sister site to these huge brands puts them in an awesome spot for their launch.

The State of New Sites in the Industry

One of the issues with new online casinos is that you don't always know who is running the show and if they are reliable. With Karjala Kasino, that's not the case, and iGaming Cloud's reputation that they have built up over the years with their other brands puts them in a position where this issue is not a factor. It's a great way to piggy-back off of their previous success and put the minds of players at ease while giving them yet another way to play.