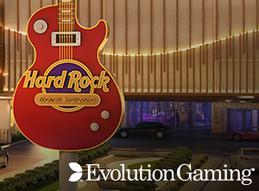 As time goes on, the lines between the online and land-based sectors of the gambling industry seem to become more and more blurred. We're reminded of this yet again with a new deal that has been signed between Hard Rock Hotel & Casino in Atlantic City and Evolution Gaming. This will see the live dealer games of the latter available for players on-site for the former as a part of a historic deal.

A New Addition in New Jersey

Atlantic City has seen better days, and the city has been in a bit of a historical slump for quite a while. To counter this, the Hard Rock Hotel & Casino has seen a massive revamp to the tune of around $500 million, and it only re-opened its doors recently on June 28, 2018.

As a part of this reworking of the casino, games from Evolution Gaming will be available to players staying on-site through mobile devices and their computers. The game offering will include three card poker, Baccarat, blackjack, Ultimate Texas Hold'em and roulette. This will make it easier for players to get in on the action no matter where they are on the premises.

To make things even cooler as a part of this deal, three Evolution Live Blackjack tables will be set up that will only be available to players who are on-site, and the main gaming floor will be receiving an Evolution Dual-play Roulette table. While players can enjoy this type of live dealer roulette from their mobile and desktop devices, they will also be able to play at the physical table in person while everything is streaming.

The Expansion of Evolution Gaming

An aspect of this situation that's so interesting is that Evolution Gaming is seeing an expansion into the US market. While this is happening in New Jersey, a state where things are regulated on a state level, it does show that growth is still happening on some level with interactions between companies that are traditionally seen as European-focused and the available parts of the US market. This type of thing helps both companies involved, but it also paints a picture that further expansion could eventually happen in the United States.