Habanero To Expand Footprint With Deployment In Italy 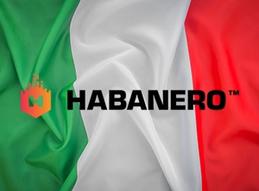 Part of Habanero's targeted Western European expansion plan for 2018 includes a push into the Italian gaming market. All of the developer's state-of-the-art casino game content created over the last two years has already been certified to meet the requirements of the Italian regulatory body, AAMS (Amministrazione Autonoma dei Monopoli di Stato – Autonomous Administration of the State Monopolies).

33 Games to be Released in 1st Tranche

The most recent game suite, created in 2016 and 2017 comprising 33 digital HTML5 titles including Dragon's Throne, Cake Valley, The Dead Escape, and Panda Panda will kick off the campaign. This will be followed by the remaining 48 Habanero slots, 10 table games, 10 video pokers, and all new titles released in the future.

Entering an Exciting Phase of Growth

Arcangelo Lonoce, who was appointed as Habanero's European Head of Business Development late last year, is leading up the company's strategic expansion. The former BetVictor executive said in a press release this week: "We have progressed our global reach significantly in recent months and are delighted to have all of our most recent games certified in Italy.

"Habanero is entering an exciting phase of its growth, with expansion across Western Europe one of our core priorities as we lead into 2018."

Series of Successful Integrations in 2017

In addition to the company's most recent deal with Digitain - a multi-channel casino platform provider, the company is reportedly in talks directly with several leading Italian operators to take their portfolio live. The last year marked a series of successful operator and supplier integrations for the company that now sees its products distributed by more than 60 aggregators and operators in 24 European and Asian languages.

The company hosts games on its own platform for play on any sort of internet connected device. Formerly known as Habanero Systems, the company was acquired by a group of European investors and began expanding in 2012.

Square in the Air, Press Release, Habanero gears up for Italian market entry 01-10-2017