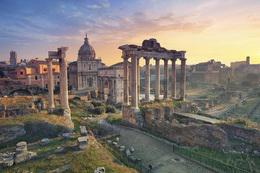 One of the most common themes in all of online slots is that of the Roman empire, especially the gladiator games, and Habanero's new Roman Empire slot is based on the same kind of theme. This game uses 25 paylines with a usual five-by-three format, and it's suggested to have a medium overall volatility. This means that you'll have a mix of big wins and small payouts that will keep you afloat while you try to take down a jackpot.

Habanero (read more) has a history of making sure that their games have very in-depth themes, and Roman Empire is no exception. This slot is built around the Roman Colosseum scatter symbol, and you'll see a helmet, shield, Caesar's face on a coin and Cleopatra on the reels. You'll have free spins based on the Colosseum as well, and something that stands out about this feature is that there's no maximum to the number of free turns that you could get.

It's very important to note that this game is based on HTML5, just like all of their new releases. Slots (like these) that use HTML5 are a step ahead of those that are based on Adobe Flash because it's a more stable platform that uses resources in a much more efficient way. They also allow software developers to put together one version of a game to use on desktop and mobile applications instead of having to dedicate resources to both, which means shorter times for game releases and a seamless game experience when you switch from one platform to the other.

Habanero Systems has been really bringing it when it comes to the new releases. Their Bombs Away release earlier this year was a good example of a game that took a somewhat standard theme based on a wartime scenario and turned it into a very in-depth title. They're great at letting the gameplay of their titles speak for itself instead of just relying on people to play any slot with a certain kind of generic theme, and there's no doubt that players will love the Roman Empire slot as well, even though the theme has been used before quite a few times.