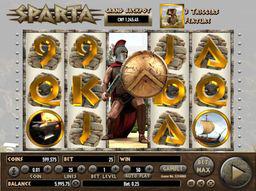 Habanero has gained a reputation in the past couple of years for coming out with a slow, but steady, stream of new games that seem to focus more on quality than quantity. Their newest release is called Sparta, and it's obviously based on the Spartan times in Ancient Greece. This slot features some really solid gameplay along with an emphasis on great graphics and an overall appealing presentation.

Details on This New Game

The Sparta online slot features 25 paylines across five reels and three rows of action. The graphics are definitely up there in quality, but they aren't gaudy, over-produced, 3D graphics like what you see with some companies that seem like they're trying too hard. You'll see warships, warriors, siege machines and all kinds of other cool symbols and visuals in this game as you wage war on some winnings. Zeus is the high-paying symbol in this game, and you can win up to 1,800 times your entire bet as a result. That's a pretty huge payout.

An Emphasis on HTML5

There's an emphasis in the industry right now on HTML5 like there's never been before. The reason for that is that more browsers are starting to phase out support for Adobe Flash, so you have companies like Habanero who want to get ahead of the curve in their new releases. Some companies, this one included, have been doing this for years, so they naturally have an advantage over any competitors who haven't been making sure they're prepared for the future.

Right now, this software provider has a bit of momentum going for themselves. They have over 60 online slots available with more than five table games and 10 different styles of video poker. This wide selection of games makes them a serious asset for any operator who wants to beef up their portfolio of games, which is especially important in today's industry. Long gone are the days where most operators only want games for one software provider, and this gives Habanero a chance to put their games up side-by-side with the best of the industry to show how well they can compete. This is a great new release for this company, and we think players are going to love it.