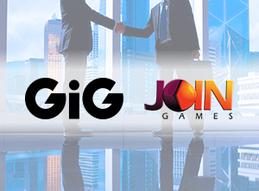 Getting into different regulated markets is an interesting task over the past several years thanks to big changes in how the online gambling industry is handled. In a recent deal, GiG Games has set things up so that they can start to penetrate the Italian and Latin American markets thanks to a partnership with Join Games.

How This Deal Works

The main idea behind this deal is that Join Games is going to act as a sort of rehosting service for the titles offered by GiG Games. Join Games has a great following in both Italy and Latin America, and this will work to allow the GiG portfolio to get some exposure to the players in both of those markets. This is a smart move for a strategic expansion, and it goes to show how two companies can work together in a smart way to make sure that they both benefit greatly.

What Join Games Brings to the Table

Join Games has been around since 2014. They're primarily known for their online casino platform, which is what this deal is actually about, but they also offer other services like online poker software. They have offices in a few different places ranging from Malta to Columbia, and the main reason that this deal works for them is that they're always looking for deals with high-quality content providers to beef up the listing of what they have to offer operators and players. It's no surprise that the GiG lineup appealed to them along these lines.

Since they first opened their doors in 2012, GiG has been dealing with the software side of the Internet casino sector. They're listed on the Oslo Stock Exchange under GIG, and they have a tremendous selection of games available under their GiG Games name that is the core reason of why this deal works so well in the first place. Players who are looking for a collection of high-quality content could do a lot worse than checking out what they have available. They'll definitely benefit from this arrangement by getting their games in front of players who haven't seen them before.