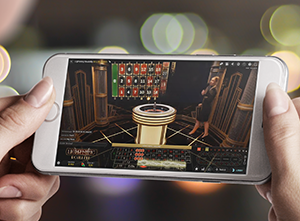 Evolution Gaming, a worldwide live games developer that specializes in live roulette games, has launched Lightning Roulette in the state of New Jersey. The developer initially released the roulette version with extra features in 2018 and it has since blossomed into a commercial success in the gaming sector, with three Game of the Year accolades under its belt. Lightning Roulette has features of a truly exciting live dealer game, including a real studio setting and user interface, stunning visuals, and sound effects to make a fantastic online casino experience. It also features the standard bets you'd expect to find in a traditional roulette game.

Lightning Roulette is an Evolution Gaming creation in which one to five numbers are "struck by lightning." Each game round offers one to five randomly generated lucky numbers, as well as substantial lucky payouts ranging from 50x to 500x, while the RTP is 97.30%. The live roulette wheel in the studio is entirely automated using compressed air technology, allowing the live host to focus on entertaining players.

Jeff Millar, Commercial Director, North America at Evolution commented: “We are delighted to launch Lightning Roulette in New Jersey and to be able to offer the game to our operators and their players in the state. Following Lightning Roulette’s phenomenal commercial success and immense popularity across our network, we are sure operators and players alike in New Jersey will love the game.”

Evolution Gaming is the most successful and renowned creator of video-streamed Live Dealer games. The world-class developer has a larger live dealer game portfolio and relationships with top-tier operators than any other live games provider in the business. It is a prominent casino game developer in the world, and its products are available in numerous online casinos. This firm specializes in creating live casino games that replicate the actual experience of playing real-size slots and table games, including Monopoly Live, and Crazy Time Casino. The supplier is credited with the growing appeal of live gaming, and with their cutting-edge studios, they continue to push the envelope of game technology.