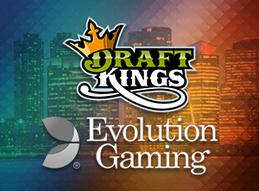 Any new deal that adds games to what's available in any of the US states that allow online gambling will be important because the market is still pretty fresh. More live dealer games are coming soon from Evolution Gaming as the result of a recent deal that has them partnering up with DraftKings in New Jersey.

DraftKings, generally known for their fantasy sports product in eight countries, launched a sportsbook in New Jersey back in August. As a part of a new deal, they will also offer live dealer games from Evolution Gaming. This is not the first US contract like this that Evolution Gaming has, but it will offer players yet another way to get in on what most experts consider to be the top-rated live dealer games in the entire industry. That these are available to players in parts of the United States is important for the growth of the sector in the US as a whole.

Something that's important about this is that DraftKings was the first to market for sports betting in the state of New Jersey after they started accepting applications. Sports betting has an interesting history in the US because it's the only type of gambling made illegal on a federal level, but the state is looking to challenge that as being unconstitutional. One way they did this is by opening up applications for online sportsbooks in the state. From here, there's sure to be a legal challenge at some point, but in the meantime, they're open to players in the state with no problems.

Growth and Expansion for Evolution Gaming

Evolution Gaming's expansion on a global level keeps increasing on an incremental level. They are by far the top name in the live dealer space, and they keep innovating and pushing up the quality of their service on a regular basis to stay in that position. So far, no one has been able to catch up to them. However, they don't rest on their laurels, and they're always looking to step things up to the next level like what we see with this DraftKings deal, which is something that would have seemed like an incredibly unlikely pairing just a year ago.