Evolution Gaming Ready to Be Listed on Nasdaq Stockholm 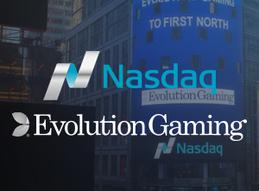 Online gaming companies are listed on stock exchanges across the globe, but many of them find themselves on the lower markets because of their size or other issues. When a company moves up to the main market, it's a pretty big deal, and that's what has happened for Evolution Gaming. They have moved from the Nasdaq First North Premier to the Nasdaq Stockholm market in a major move for the company.

The Growth of Evolution Gaming

This is a company that has seen tremendous growth over the years. They first went public in 2015 with a listing on the Nasdaq First North Premier, and now they are moving to the main market. This supports how much growth they were already seeing, but it also shows that they have achieved quite a bit of growth on their own, and that's one of the key things to understand about this company and their place in the industry because they have been doing great things.

The key thing to understand about them is that they are, beyond the shadow of a doubt, the number one company to offer live dealer games in the online casino world. These games allow players to log in and play with actual human dealers over high-definition video and audio feeds from live casino studios. Play happens through a virtual interface, but the cards and roulette wheel themselves are real, and you can do everything that you would normally be able to do in a casino like tip a dealer or chat it up with others at the table.

The Future of this Company

Evolution Gaming has been steadily growing over a number of years, and they've found their games in front of more and more players as a result. We've seen them make their way onto various software platforms and make several deals with big operators, and this level of expansion has remained steady for a while now. They are definitely seeing the effects of all of this work with this move to the main market on the Nasdaq Stockholm, and we're sure that their value will continue to increase along these lines.

Press Release, Evolution Has Been Approved for Listing on Nasdaq Stockholm and Publishes Prospectus evolutiongaming.com, June 8, 2017