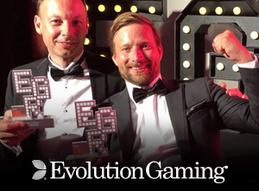 Anyone who is familiar with live dealer games in online casinos will think of Evolution Gaming. They're widely considered the best in the sector, and this has been the case for quite some time. That's why it's not so surprising when they take down some serious awards for their efforts, and that's exactly what happened recently with the EGR B2B awards.

Details on the Wins

The first win of theirs came from the Multi-Channel Supplier of the Year category. This is a tough category overall because they're up against around a dozen other names, and it's honestly surprising that they pulled this one off. They are a part of this category because their product can be played on desktops as well as smartphones and tablets.

The second win was not surprising at all, however. This one came in the Live Casino Supplier of the Year category, and it's not surprising because it's the ninth year in a row that they have won this particular prize. Because they are widely regarded as the best live dealer game provider in the industry, and because this status hasn't changed for quite some time, it's hard to imagine that anyone familiar with the live dealer landscape was surprised by this particular win.

About the EGR B2B Awards

These awards started in 2010 and are ran by the eGaming Review. Note that this means Evolution Gaming has won the Live Casino Supplier of the Year award for every single time these awards have been held. It's one of the most important awards ceremonies in the entire industry, and it's an excellent example of how the business as a whole provides serious incentives for companies to do well.

Evolution Gaming is a top provider of live dealer online casino games. They have been around since 2006, and their focus has always been on giving players high-quality experiences by playing live dealer games like Baccarat, casino hold'em and blackjack online. They now offer high-definition audio and video feeds for their games that you can play at a variety of stakes 24/7/365 from your mobile device or desktop system. What's more is that your operating system doesn't matter either thanks to their web-based design.