Erik the Red Slot Launches as First From Relax Gaming 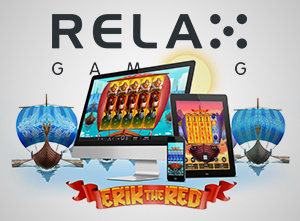 Relax Gaming has made their entry into the video slots genre finally. Their first video slot has been released, and it's called Erik the Red. It's not hard to guess that this title uses a viking-based theme, and they have done a great job with their initial effort into the video slot space.

What you have to understand about this game is that it represents a big leap forward for the developer, and it coincides with the launch of their Silver Bullet platform, which is set up to make it easier to share their content with operators and other software suites.

With the Erik the Red slot, you'll see Erik with his wife Helga on their way to Greenland as they try to settle new land. That's not all that different than what Relax is doing right now, so it's easy to see the parallel in a metaphorical way.

You'll see all kinds of viking-related symbols on the reels, and that happens in front of a big longboat sail. Vikings were known for their longboats because of how fast and agile they were. Along these lines, you'll see stacked wild symbols, random wilds and a chance to catch some free spins while you're adventuring on the seas with Helga and Erik. While you do this, you'll be able to pick up wins at different sizes thanks to the balanced pay table as well.

The Future for Relax Gaming

It looks like Relax Gaming is setting themselves up to be in a great position in the future, and that's the kind of thing we like to see from companies that really want to bring it hard to the competition. How their games do is yet to be seen, but from what we can tell, Erik the Red has everything needed to get a pretty solid reception. We have no reason to believe that there will be a serious drop-off in release quality, so we're looking forward to seeing what else they're able to bring to the table in the video slots arena.