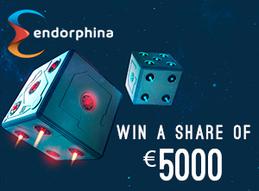 The latest game by Endorphina is 2027 ISS, a game that celebrates the anniversary of one of the most important human ventures into outer space. To bring even more attention to this new release, they're running a promotion right now that will give away €5,000 in prizes. It's a great way to have a chance to win big just by trying out this new title.

What This Game Offers

2027 ISS is a game that gives players a mix between a modern space theme and a gambling theme. You'll see intergalactic dice, roulette wheels, playing cards and all kinds of other familiar symbols when you play, and there's even a chance to hit some pretty significant jackpot wins. The graphics are outstanding, and the gameplay is solid, as is the case with all of the games produced by this company. It's a great example of Endorphina staying on the cutting edge of the online slot industry.

Getting Paid in This Promotion

This promotion ends on April 18. It's set up to give you chances to win a piece of a €5,000 prize pool just for playing this game. We're a fan of promotions that give you value for playing games that you'd be playing anyway, and that's exactly what you're getting here. You don't have to do anything special to qualify except show up and play at select casinos that use their software, and after April 18, the winners will be announced, and the prizes will be awarded accordingly.

Endorphina has done a great job of making themselves stand out from the crowd. They've generated a bit of controversy earlier this year over their Maori slot release, which offended some people because of its use of certain elements of the people the slot was named after. They also had a ton of controversy last year over their Twerk slot, a game that is completely covered by the rear-ends of various dancing women. Regardless, their games are always of a high quality, regardless of the controversy, and you can see that with 2027 ISS. Overall, this is a solid promotion for a solid game, and we wish the best of luck to everyone who takes part in it.