Endorphina Pleased with Certification in the Netherlands 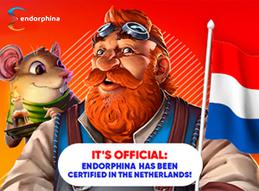 Several online casino major suppliers have already launched content across the Netherlands, as the Dutch market is now regulated. Endorphina, a well-known casino software developer, announced that it has taken a step toward the Netherlands thanks to its new certificate. As the slot provider makes its debut in the Netherlands, the provider continues to expand into new European jurisdictions. Its games, such as Water Tiger, Joker Stoker, Around the World, Solar Eclipse, 3 Thunders, Hell Hot 40, and Asgardians will become available to players in the Netherlands after they have received certification from the country's regulatory body.

Endorphina wraps up a busy February by gaining certification for its slot titles in the Danish market, cementing its European presence. February also saw the B2B online slot games provider collaborate with Uniclub and Sportingtech to expand its casino offerings and strengthen its presence across the world.

Endorphina’s CEO, Jan Urbanec, also commented on the new expansion:“2022 is shaping up to be a record-breaking year for Endorphina in terms of entering new markets. We’ve highlighted this even further by getting our games certified for the Dutch market during the first month of this quarter. Well done team Endorphina!”

Endorphina is a well-known and reputable developer of casino games that has been operating for over a decade. The business is based in the Czech Republic's capital city of Prague and has become very popular over time thanks to excellent online slots. It strives to put unique designs into their slot machines as well as innovative features which definitely make them even more popular among the players. For gamers familiar with their titles, it is clear that the brand's main mission is to develop the highest quality games filled with engaging 3D animations. In addition, the games are HTM5 compatible, allowing players to enjoy the content across different devices and platforms. The brand was able to expand its network through a partnership with XIN Gaming, which has helped them grow and expand in Asia and beyond.