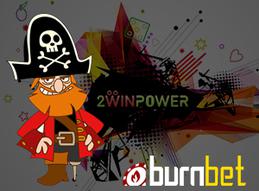 In the online casino industry, the integrity of the games that players are enjoying are extremely important. This is why game forgery is taken so seriously. Players can't know if they are having the wool pulled over their eyes in terms of payouts and fairness if they are playing unlicensed forgeries instead of the real thing, and that's why the news of more unlicensed games from 2WinPower being found at Burnbet is such a big deal.

Over 50 total slots were found to be pirated in an investigation performed by the LatestCasinoBonuses team. All of these games are provided through 2WinPower, a name known for fake, unlicensed slots in the industry. They use the domain gmtr3.com to host their games, and that's exactly what was found as the key piece of evidence in the situation that's going on at Burnbet right now. When this information was brought to their attention, however, things got ugly.

After the publishing of an article detailing the fake games over at LCB, they were contacted by the alleged CEO of Burnbet, who went by the name of Tina and who made various threats with no explanation or discussion of the actual problem. This is a pretty good sign that players should avoid this casino since a site that really cared about the safety of its players would instead work to immediately remove the unlicensed games and move forward from that position. The threats and unlicensed slots, combined with various player reports of payment issues, have earned this casino a place on LCB's warning list.

Overall, this is actually a pretty strange scenario, but it's not completely unheard of. We've seen situations with 2WinPower offering up unlicensed slots before at other casinos, and we've even seen big cases of other companies doing the same type of thing in land-based casinos as well. Something that made the whole situation even stranger is that they offered games like Playtech's Marvel Jackpots series, which were actually pulled earlier this year after their licensing deal with Marvel expired, so it's clear that something was seriously amiss in their game offering.