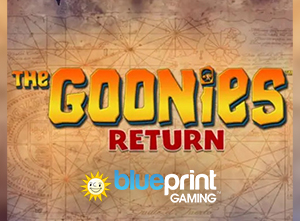 Blueprint Gaming brings a sequel to its 2018 release called Goonies Return. This game provides a similar playstyle, improved design, and several exciting features that are built on the original idea and allow fans of slot machines to enjoy this title again. This title will be a trademark based on an 80s movie, directed by Spielberg.

Like in the original title, the action takes place on 5 reels, 3 rows, and 20 active paylines. Punters will have a chance to win up to 50,000x the bet or $250,000. Goonies Return should be suitable for different types of players as this is a medium volatility game with an RTP of 96% is around the industry average. The betting range has not been changed and goes from $0.1 up to $100. However, this time Goonies comes with more bonus features which include doubloon wilds, a one-eyed Willy feature, Truffle Shuffle Wilds, modifiers, Lucky Coins, Hidden Riches, W-invention Reels, a bonus wheel, Booby Trap feature, a Waterslide to Wealth Bonus, and extra spins.

The Goonies comeback looks good, pays incredibly well, and will surely keep players engaged for a long time, especially due to plenty of exciting bonus features!

Jo Purvis, Director of Key Accounts and Marketing UK at Blueprint Gaming, said:“Hey again you guys! The biggest game of 2021 has finally arrived and offers a feature-rich adventure that doesn’t disappoint. The original slot inspired by the cult classic film proved to be an overwhelming success and continues to attract players to this day. With this new installment, we are providing fans of The Goonies with the sequel they truly deserve, as well as an exciting new gaming experience for players worldwide.”

Blueprint Gaming is a casino software developer that creates games for various online and land-based casinos around the world. This company was founded in 2001 in Atlanta, and in the same year, the German group Gauselmann acquired part of this brand. It is currently operating from its UK headquarters, as well as in the Philippines, and is partners with Danoptra Gaming Group, Games Warehouse, Inspired Games, Gala Coral Group, and others. It is known for its open distribution model, where the entire game library is available for online and offline streaming, and all of their content is fully optimized for various platforms, including Android, iOS and Android devices.