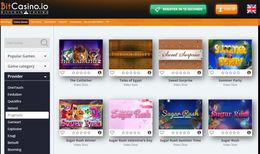 In the online casino industry, the number of titles that a site has usually comes down to how many different software providers it has content distribution deals with. Bitcoin.io already has games from a number of providers thanks to the Coingaming platform, and now they are adding even more. Games from Pragmatic Play have been added as well thanks to a new deal, and this includes a total of around 120 titles.

One of the things that makes this move so easy is that Pragmatic Play's games are based in HTML5. For years, Flash was the way to go for mobile and web-based game platforms, but the preferred platform switched to HTML5 over the past several years after it was found to be more stable and have better resource management with better cross-platform compatibility. This is a big deal because when different software providers use HTML5 for their online slots and other titles, it makes it pretty easy for a casino to include different games from different developers in one platform.

With the inclusion of the Pragmatic Play portfolio, Bitcasino.io now has a total of more than 1,000 games available for players. This comes after games from providers like Net Entertainment, BetSoft and Microgaming (through the Quickfire platform) were already included, which really lists out the best of the best in the software side of this industry. It's a very impressive lineup of games, and it goes to show that they are looking to be a one-stop shop for players who want to get in on the action with the hottest games that the industry has to offer.

Running since 2014, Bitcasino.io has been giving players the opportunity to play online casino games using bitcoin for the past two years. This is the most popular cryptocurrency, and it makes it easy for players who know how to use it to get in deposits and withdrawals without a lot of the usual headaches and high fees that you see with more traditional banking methods. They have a great help desk for anyone who wants to learn how to use bitcoin to play, and their customer service team will very gladly help to walk you through the steps if you'd like.