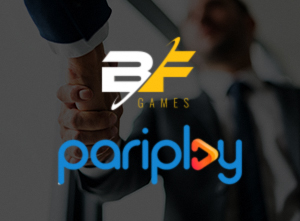 It has just been announced that the aggregator giant Pariplay has signed an agreement with BeeFee Games that will allow full distribution of the entire BF Games portfolio on their Fusion platform.

Both Pariplay and BF Games are thrilled to have struck this deal. The entire roster of Pariplay's operator network will have full access to the entire suite of BF Games' slot titles, which is a hefty addition to any operator's catalog.

One of Pariplay's operator partners, Trada Casino, will have the exciting honor of being the very first of the Fusion casinos to go live with the new selection of BF Games titles.

Adrian Bailey, who is the general manager of Pariplay, has commented that he is confident that BF Games' "broad portfolio of engaging slots will be a hit with operators and players alike."

BeeFee's Head of Business Development Claudia Melcaru has expressed their excitement for this deal as well. She noted that Pariplay is a "reliable partner" and mentioned that they are already in talks "about teaming up for other projects with Pariplay as an aggregator for our extended group."

BF Games, sometimes known as BeeFee Games, has been around since 2013 and already has a considerably broad reach.

The company is based in London, but they have partnerships with distributors that allow them to offer their extensive portfolio of high-quality slots titles to online casinos all over the globe. One of the main focuses of BF Games is to consistently produce games that push the envelope, engage players and constantly improve in quality and playability.

It's also important to note that BeeFee Games is a strong proponent for fair and responsible gaming. Not only do they hold licenses from the Malta Gaming Authority and the UK Gaming Commission, but they are also eCOGRA certified and quite vocal about the importance of responsible gaming.

Pariplay Limited is one of the industry leaders when it comes to iGaming system providers. They have both in-house and integrated gaming platforms that boast games from all of the leading software developers.

The company was founded in 2010 and has offices around the world in order to better support the needs of their customer base. They are focused on player safety, quality and providing an excellent, consistent gaming experience.