Betsoft Games to be Handled by BtoBet's AI Learning Machine 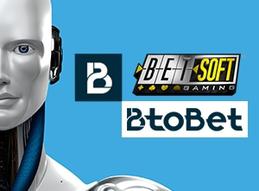 Betsoft Gaming has announced a deal with tech firm BtoBet that will see their entire suite of games become available in BtoBet's target markets for the products in Latin America, Europe, and Africa. Hundreds of multi-software online casinos already carry Betsoft games that players are familiar with due to the developer's pioneering work with interactive 3D slot and other game elements. Their first major proliferation began with a deal inked by NYX in 2010 at the same time the company signed Microgaming and Cryptologic to the NYX Rapid Platform.

Betsoft Gaming was launched in 1999 and are the architects of industry innovations such as the Shift™ platform, the ToGo™ suite of mobile games launched in 2012, 3D video slots, and the animated interactive Poker3 casino table games.

BtoBet is an artificial intelligence-centered tech company with a worldwide industry presence at trade shows and conferences. They have received awards from peers and judges including "Best Sports Betting Innovation 2017" at the CEEG Awards in Budapest as well as more recently, at the SBC Award in London where they took home the SBC Award for "Rising star in Sports Betting Innovation".

Anna Mackney, account manager at Betsoft spoke of BtoBet's position as a leading innovator in the industry that deeply analyzes emergent and existing trends to strengthen their services. She called the company 'future-ready and flexible' and spoke of positive synergies when she said: "Our full suite of solutions, including Key Performance Indicator reports, will be invaluable to them," according to press releases found on both company's websites.

"All Betsoft's integrated games will be managed by our clever Artificial Intelligence learning machine, providing a real-time and accurate data analysis per each customer in order for the operator to automatically segment the players' base and to build easily the best strategies, specific promotional activities and more effective ad hoc marketing campaigns," concluded Fried.

BtoBet's commercial office is located in Malta with a sports book office in Rome and main development office in Belgrade. Developers work from Skopje, Ohrid, Bitola, Belgrade, Nish, Tirana, and Rome. They are a Betradar Certified Gold partner.