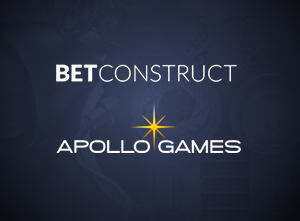 Partnerships between software developers and companies that offer casino platforms are pretty common these days because of how the industry is structured. However, they're still pretty important, and that's why the news that BetConstruct has added games to its platform from Apollo Games is such a big deal. It puts the former in a position to offer more to players, and it puts the latter in a position to get their titles in front of more people who may want to enjoy them.

Details on This New Deal

The games included in this deal include Slot Birds, Turbo Slots, Blood and a variety of others. Because BetConstruct is truly an industry leader on the platform side, this will give Apollo Games a tremendous amount of exposure, and that's what helps to make it a win-win for both companies involved. These types of deals happen quite a bit, and though it doesn't necessarily include the full portfolio of titles from Apollo, it puts them in a position to be noticed.

Something really critical about deals like this in the modern era is that, because all of the titles being used are built in HTML5, incorporating them into the platform is extremely straightforward compared to how things were previously. This also puts players in a position where they can play equally easily from a computer or a mobile device (including both smartphones and tablets), which creates a very flexible platform overall. Again, this poses a win-win scenario between the players and the software developers, which is a big part of the reason why HTML5 overtook Flash in the first place.

BetConstruct's Goals for the Year

As it stands, the BetConstruct platform is getting more and more titles as time goes on, and these games are from some very well-respected developers. This in turn helps them to get more market share and more players, which will fuel future results as well. We like what they have to offer, and as they continue to expand in the first half of 2018, they're clearly building up some momentum. We hope that they're able to take advantage of it and push through the rest of the year and on into 2019 while picking up more and more steam.