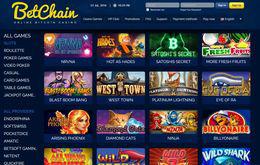 The number of games that an online casino has available is one of the most important things that help to determine where it will fall relative to the competition. BetChain, a popular online casino known for allowing players to deposit and cash out in bitcoin, has made a bit of a name for itself in this department since they have recently broken a milestone by offering over 1,000 games for their players. This is a pretty big deal, and it makes them one of the top bitcoin casino sites running today.

As you might suspect, video slots and classic slots make up the majority of the game selection at this casino. This is typical for the industry, and you'd be hard-pressed to find a single site where this isn't the case. However, they don't just have quantity because they also have some of the highest quality games in the industry. Titles from Net Entertainment, Microgaming and tons of other top providers make sure that you're getting the best the industry has to offer when you play here.

There are some online casinos in the industry that accept bitcoin for deposits and withdrawals, but there are few still who allow you to actually bet in the cryptocurrency on the games themselves. What sets BetChain apart is that they allow you to make deposits and play in bitcoin along with other more traditional currencies like the US dollar and the euro. This allows them to offer a very flexible offering that all kinds of different players can take part in.

Top Games in the Industry

If you ask 100 different players who makes the best online casino games in the industry, you're likely to only get three or four answers as the overwhelming majority of votes. NetEnt and Microgaming are definitely going to be among those listed, both for the quantity of their games and the quality of them, especially their latest releases. Both of them have also traded the top spot for the largest progressive jackpot in the history of the industry, and both record-breaking games (Mega Fortune and Mega Moolah) are available in one spot with this casino's huge selection of games.