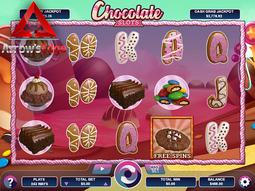 The year is almost over, but Arrow's Edge has shown that they still have more games left coming down the chute for the winter months. Their most recent release is a game called Chocolate Slots, and it's a title that will definitely make you feel hungry if you have a sweet tooth. It's all about chocolates and other types of sweets, and the graphics are solid enough that it makes these different foods really pop out at you.

Lots of Ways to Win

There are a ton of ways to win in this video slot thanks to the 243-ways format that runs across five reels and three rows. You'll also have a ton of action with two different progressive jackpots for grabs, one of which hits in the range of $5,000 and the other that hits as high as $10,000 on average. The basics of this game are very promising, but there are some strong bonus features as well.

Arrow's Edge has put two major features in this game to drive the gameplay in a major way. The first is the Walking Wild feature, and it's based around the wild chocolate bar. Whenever you get it on the reels, you'll get free re-spins where it moves one reel to the left for each turn until it's all the way off of the reels. You an also get three or more of the chocolate cookie for a set of ten free spins. This includes sticky wilds, which gives you even more value.

Where Arrow's Edge is Heading

The story with Arrow's Edge has always been that they produce games with solid gameplay but that the graphics and interface are very much lacking. While Chocolate Slots might not really measure up visually to some of the best games out today, it's definitely an improvement over some of the games they have made in the past. They've maintained a very strong level of gameplay with this slot, and they seem to be improving at the visual side of things as well. If they continue to improve during 2017, then we could very easily see them become a main contender at some point.