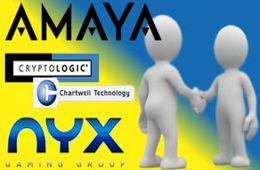 The Amaya Gaming Group has made an enormous amount of noise in the news over the past year, and they've done it again with a key deal that shows a lot about their investment strategies. They have sold Chartwell and CryptoLogic, two online casino software providers, to NYX Gaming. This deal was for $110 million in cash and $40 million in stock, and this comes after they've held both companies for less than four years.

Back in 2011, the Amaya Gaming Group bought Chartwell. In 2012, they also purchased CryptoLogic. Chartwell wasn't doing so great at the time, but in the case of CryptoLogic, they'd had trouble even staying in the black for consecutive quarters for the past few years. Amaya saw these two companies as good investments that they could turn back into being software powerhouses, and they did just that. Both companies became profitable after being turned over to Amaya, and now they're selling them for a good bit more than what they paid for them.

Amaya is now focusing more on customer-oriented business like PokerStars and Full Tilt Poker, and they're focusing less on B2B companies like Chartwell and CryptoLogic. We've seen this strategy in action with their role in the bidding war over bwin.party lately as they have paired with GVC to go up against 888 Holdings. The winner of that bidding war will shoot up the rankings and become one of the largest online gambling companies in the world. While the outcome of that bidding war isn't clear yet, what is clear is that it's in line with what Amaya says they're focusing on now.

Something that makes this deal interesting as well is that it includes terms for Amaya to continue licensing the content owned by Chartwell and CryptoLogic. A major part of this probably has to do with the fact that those games have become staples in Amaya's online casino software solution, and they probably don't want to disrupt the experience for their players or operators. This is a smooth business decision, one among many, and it just goes to show that Amaya is thinking both long-term and short-term at the same time to cover all of their bases.