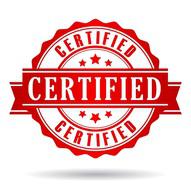 Something that New Jersey online gambling sites have run into is the simple fact that there are a lot of foreign operators who are still going after their customers. In an effort to help players who would be confused about which sites are licensed and which are not, New Jersey's Directorate of Gaming Enforcement will now be requiring licensed sites to show a specific seal on their websites. The idea is to make it easy for players to figure out if a site is regulated in the state or not right away.

Current regulation in New Jersey is considered by many to be the best in the United States. They have online gambling sites pair up with licensed, land-based casinos before they are able to operate their games, and while that might seem like it is an unnecessary hoop to jump through, part of the logic is that it helps the market to keep from becoming flooded. As a result of having a limited number of licensed sites, however, they're now having to post a seal on their websites to separate themselves from their unlicensed competition, and the hope is that this will give them a competitive edge.

Something that's interesting about this situation is that it only really protects players against honest operators. The dishonest ones would have no problem with some sort of geo-targeting situation that showed a copy of the New Jersey "licensed and regulated" seal when someone from the state visited their website. This might sound ridiculous, but we've seen it done before on multiple occasions with companies faking the eCOGRA Safe & Fair Seal as well as various licenses, so it could happen again.

Is It a Good Idea?

Despite this potential objection listed above, we believe that it's a good idea to require regulated New Jersey sites to post this type of seal. It helps to make it clear that these companies are licensed, but if they could have the seal link to some sort of official document that couldn't be easily forged as a matter of public record, then it could help to protect players against shady operators who might try to fake the New Jersey seal.