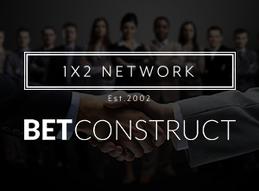 Earlier this year, 1x2gaming made a change in name and structure to the 1X2 NETWORK. While the most immediate thing you'll notice in that change is that they went from all lowercase letters to all uppercase letters in their name, there are other things behind the scenes that make this a good thing for players. A new content distribution deal with BetConstruct is a good example of this, and they will be deploying BetConstruct's games through their platform as a result.

In the previously named 1x2gaming software development company, HTML5 was the focus from a platform perspective. This was long before it was considered the standard for the industry like it has been for the past 18-24 months or so. Not all companies have completely gotten on board with this, and those that haven't are quickly falling behind. BetConstruct also builds all of their games with the same platform, so they are put in a situation where it will be easy to integrate all of the applicable titles along these lines.

There are three main genres of games that BetConstruct works with. Those are online slots (which is likely to be the main focus in this particular deal), table games and sports-based games. The three platforms that they're able to access through their use of HTML5 include desktop, mobile and land-based. The latter of these is the most interesting in the sense that the 1X2 NETWORK's games get a lot of crossover play to the land-based arena through retail shop terminals, and that will expose BetConstruct's titles to an even larger selection of players.

It's easy to see where 1X2 NETWORK's head is with this deal: online slots. Almost all of their focus has been on this particular genre of games, and a good example of that has been the newly formed Iron Dog Studio that came from their corporate restructuring. This development studio is focusing on high-quality slots as well, and they've had a number of releases along these lines since they were formed as a company as a part of this new 1X2 NETWORK. With more developers joining on to have their games in this particular platform, it will give players another option for getting a lot of great games all in one place.