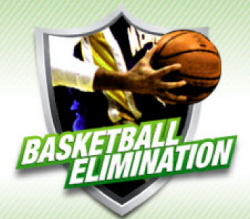 This Fantasy Basketball game of Elimination is a special 2 week NBA Clubhouse Elimination contest by RotoPlay, where your goal is to utilize your fantasy GM skills to build a team that will accumulate more points than that of your competitors’, to win the Grand Prize . Those who finish in the Top 15 are also awarded great prizes.

Cost: Entry fee, and an entry fee for each additional entry. Buy 3 entries and get the 4th entry free for a great savings.

Prizes: Grand Prize $500. Prizes also awarded to 2nd – 15th places after the two-week contest is over. Note: All prizes are doubled at 250 entries.

Method of Play: On the Internet, phone and postal mail. There is a Maximum of 500 entries per contest.

Entry Deadline: The Basketball season begins near the end of October. Check below periodically for the entry deadline status.

Status: Every two weeks before the deadline to each contest. The Basketball season begins near the end of October. More information on this contest at RotoPlay.

Test your knowledge and skills within the fantasy basketball leagues during the NBA and NCAAB seasons towards receiving cash rewards while playing Fantasy Basketball at RotoPlay.