50% Up To R5000
Wagering requirements for deposit bonus coupons are 30 times the sum of the deposit plus the bonus. The following games count towards fulfilling the wagering requirements for all bonuses: 7 Stud Poker, Bingo games, European Slot Poker, Keno, Pai Gow Poker, Scratch Cards and all Slots unless otherwise stated.
Play 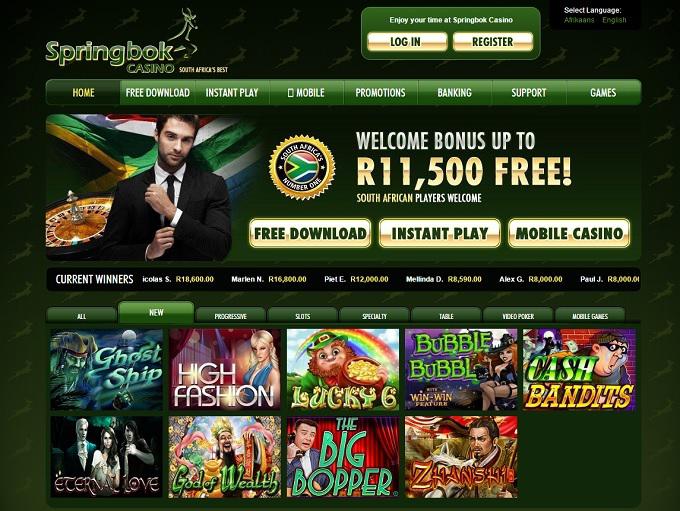 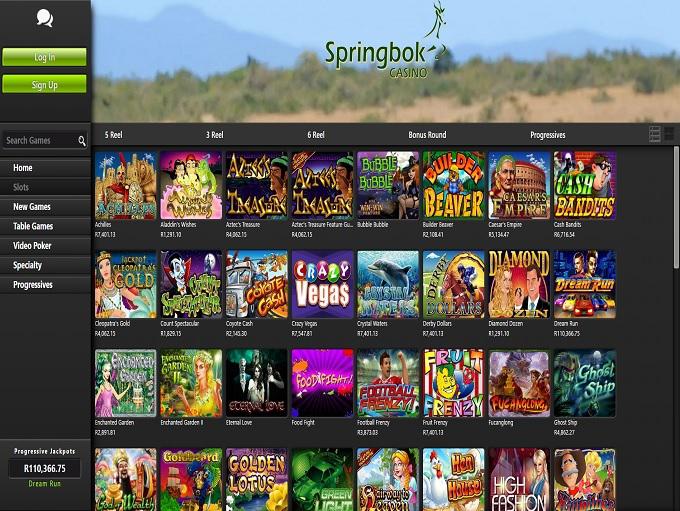 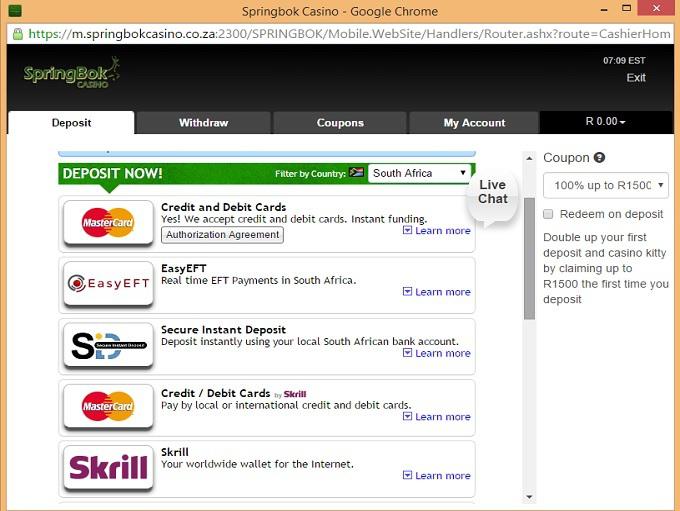 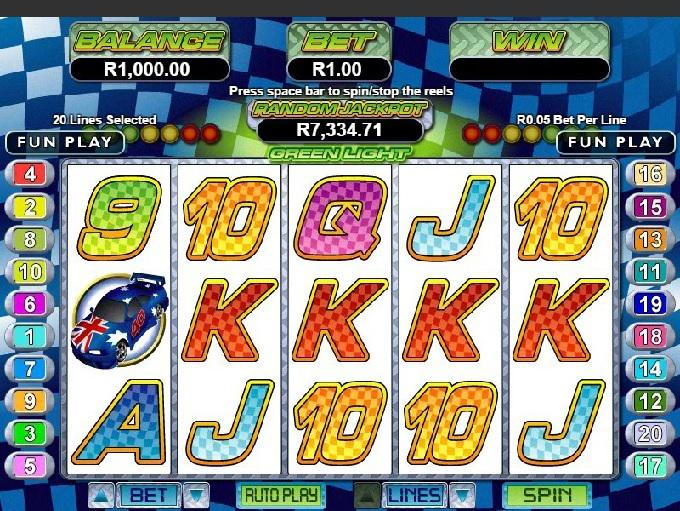 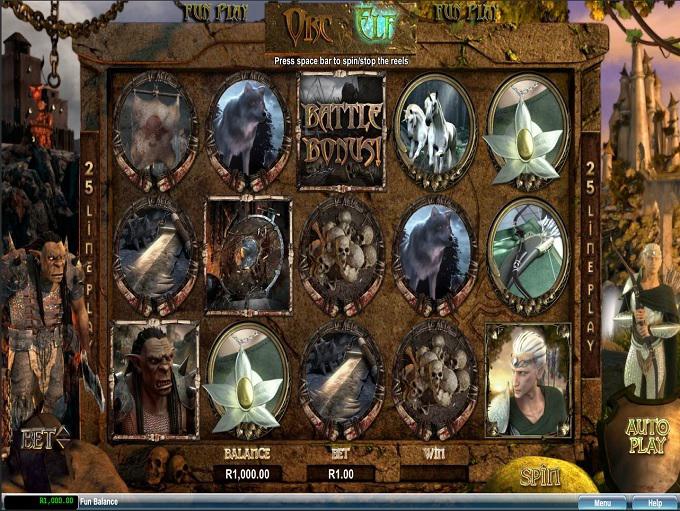 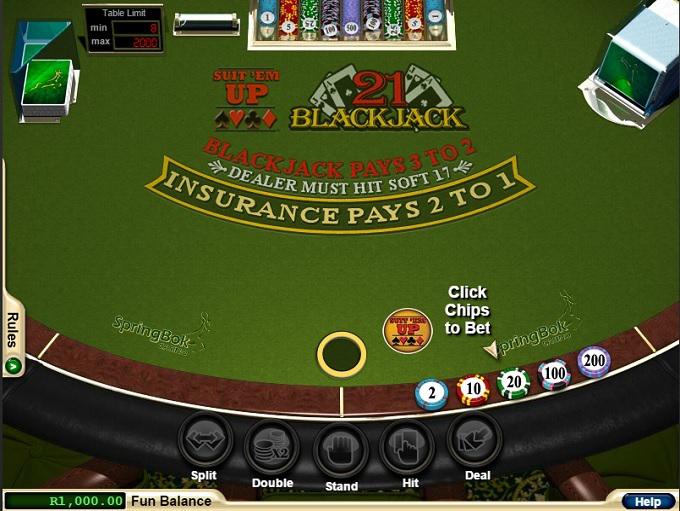 Springbok Casino is a site that targets players from South Africa, though players from other countries are allowed to play as well. However, people from the United States are not allowed. This site was started in 2012, and they're licensed in Curacao. Overall, this site offers a so-so experience with a number of key weaknesses that won't necessarily earn them a spot on anyone's blacklist but that don't really paint them in an overly favorable light either.

The software offered here is powered by Realtime Gaming. This is a company that's been around for quite a while, and they have a game selection that's about average. Their software comes on three platforms for players: a downloadable platform for Windows PCs, an instant play option that runs in your web browser and a mobile software option that also runs in the web browser. These web-based options are very convenient because you don't need any particular type of phone, computer or operating system to make them work. All you need is an Internet browser that's been updated and a connection.

The slots here vary in style and quality. Many of the games look like they're pretty dated, but their most recent titles are right up there with the highest tier of games in the industry. It's an interesting mix, and new games come out several times each year.

Something that really stands out is their Real Series of video slots. The titles in this series have a few things in common. First, the interface is more or less the same on each, and that makes it easier to intuitively move from one title to another. Second, the games have random progressive jackpots, sometimes more than one on each game, that start off at values like $1,000 or $500. These jackpots build continuously until they are triggered on a random spin.

There's a pretty good selection of table games at Springbok Casino. You can get in on the action with several styles of video poker, for example, in addition to blackjack, roulette, craps and Baccarat. They also have multiple styles of casino poker and other card-based games like Vegas Three-Card Rummy, some of which are atypical or not widely available. This is a pretty good option for players who prefer non-slot titles, and they even have keno and scratch card games for players who want to get chances to win some sizable payouts inside of short sessions.

In terms of payment options, there's a relatively narrow selection. The most popular choices are Visa, MasterCard, Skrill and Neteller. While these represent the most popular credit cards and electronic wallets, they don't really have a lot to offer outside of that except for EcoPayz for some players and bank transfers. Overall, the selection is adequate, if a little lacking.

One disadvantage of playing at this site is their withdrawal limit. Everything is handled in the South African rand, and the withdrawal limit is R10,000 each week. That sounds like a lot for people who aren't familiar with the currency, but that's an equivalent of about US$650. That's one of the lowest limits in US dollars that we've seen in the entire industry, and it's honestly to the point of ridiculousness.

In addition to this ridiculously low withdrawal limit, they also have a pending period on their withdrawals that lasts between three and four days. Add that to payments to Skrill and Neteller that take another two or three days on top of that, and you have withdrawals that are pretty slow compared to the industry average.

The support methods available here are email and telephone only. No live chat option is available, and that's really weird considering how many players log in through their web-based, instant play option to enjoy the games. We emailed support to ask a few questions for this review, and we received a response the next business day, which was two days later (we emailed on a Saturday). Along these lines, you might not get the fastest service if you use the email option.

This site probably comes in somewhere around average overall. The game selection isn't the best compared to other sites that run titles from multiple software providers, and there are a number of issues with their withdrawals, though they are reliable once you actually get them. The selection of casinos that target South African players is rather limited, so we could see players from there choosing this site based on that. However, international players have so many other options that blow this site out of the water that it doesn't really make sense for them to play here.