Dreams Casino has a warning, we advise you play at another casino.

200% Up To $2000
New Customer Offer. T&C’s Apply. 18+. Min deposit: 50 $. Bonus comes with no wagering requirements for slots games and no limits to how much you will be allowed to withdraw, but bonus amount is considered non-cashable and will be removed from the amount of your withdrawal request.
Play 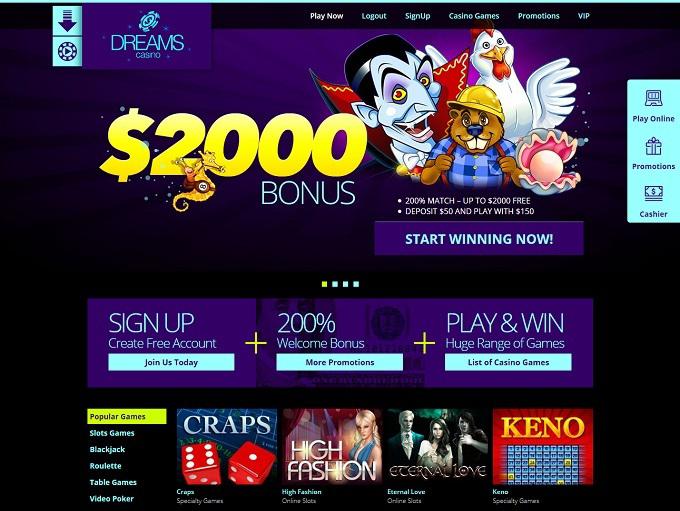 In the world of online casinos, there are a lot of good and bad options to choose from. Knowing which sites are the best is just as important as knowing the ones to avoid. Dreams Casino is one of the latter, and they're operated by the infamous Virtual Casino Group. This group is known for having sites licensed in Costa Rica, one of the least-reliable jurisdictions in the world for this particular industry, and taking advantage of the fact that they have no enforcement of their rules.

The bottom line is that players should never play here. There are several better sites to play with that offer the same selection of games. We're going to show you why you should avoid this site and what you can do if you still want to play these games.

The software here is powered by Realtime Gaming. RTG has a reputation for putting out low-quality games, but to be fair, they've largely turned that around and have started putting out a number of high-quality titles each year. With that having been said, they still have under 200 games, and that's not really something worth bragging about when there are sites out there with over 1,000 high-quality games that are much more reliable.

Around 80 slots can be found at this casino. The core group of slots fall under what's called their Real Series, and they all have random progressive jackpots. Most have one, some have two, and a few have three or four. The largest of these random progressives seed at $1,000, and some seed at $500 or $250. It's worth pointing out that they do have other bigger progressives that sometimes pay five- or six-figure wins, but you have virtually no chance of getting paid if you do win, so it's hard to call that an advantage.

One good thing about Realtime Gaming is that they provide a decent selection of table games with graphics that aren't terrible. Their video poker selection in particular is of a pretty high quality, and they have a couple of dozen of these games to choose from. They also have the complete selection of classic casino games like roulette, Baccarat, blackjack, craps and casino poker on top of a selection of keno and scratch card games.

Dreams Casino advertises the fact that they accept Visa, MasterCard, Neteller, Skrill and Click2Pay with additional options for direct bank transfers and paper checks. They also point out that they have a $2,000 limit per week on withdrawals. If this was the end of the story, then that wouldn't be bad at all. However, that's hardly the tip of the iceberg.

The fact of the matter is that this online casino has a terrible reputation for simply not paying players. There have been a countless number of complaints against this particular site and other sites operated by the same company. If you do get paid, you can expect weeks or months to go by before your payment is processed, and they're really bad about all but making up reasons to confiscate winnings with obscure bonus terms and conditions.

To make matters worse, their support team isn't much better. They have email and phone options along with a live chat messenger. Their customer service team has a reputation for being rude with players and not really trying to be helpful at all. In an industry that's based primarily around solid customer service, it's clear that they don't care about keeping the business of their players.

A Culture of Shady Business

One theory for why this site handles things the way they do is that they are a part of a group that puts out more free chips and no deposit bonuses than almost anyone else. This obviously attracts a higher rate of scammers and multi-accounters than normal, and in turn, they would have to tighten things up a bit to keep themselves from being fleeced. This could honestly be why the support team seems so jaded and unfriendly, and it could be one of the sources of a lot of their other problems as well.

With that having been said, there is simply no excuse for this type of behavior from an online casino in today's industry. If you'd like to take a look at some Realtime Gaming-powered sites that have a better reputation for taking care of their players, then check out this list of RTG Casinos. You should avoid Dreams Casino completely since there is no reason to put up with the bad service and virtually non-existent cash outs.