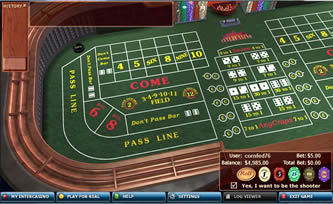 Everyone will tell you Craps is a very intimidating game-even (and perhaps especially) when you don’t have a large, cheering crowd gathered.

The great thing about playing Craps online is the ability to play for free while you’re still learning the ropes-so take advantage of our Craps tutorials and recommended casinos!

Cryptologic, for one, offers both free and real money Craps, and it has the graphics, the features, and conventional Craps rules to get you started in style.

Cryptologic has been providing online entertainment since 1995 (not that long ago for some of us, and for others it was a bored year in grade school. Sigh). Known for their affiliations with highly recognized brands like Call of Duty and Spiderman, Cryptologic is an accessible casino software platform-from download to instant play, PC to Mac, Europe to the United States.

Cryptologic brings its well-known features to a well-known game, and the result is an entertaining blend of fun, suspense, and competition.Don't let the game intimidate you.  Learn the rules, the names of the different combination bets and above all, become familiar with the odds associated with those bets. Visit a Cryptologic Casino and play Craps today.