This free Let it Ride Poker game, let the excitement begin with the dealing of the first 3 cards, you can either pull to these 3 cards or Let It Ride.

Free Let it Ride poker game wagering: Bets top out at $300 per hand and payouts start out with 10s or better paying 1:1 and the big payout is on a Royal Straight Flush which pays 1000:1.

The free Let it Ride poker Bonus: The bonus payouts range from 2pairs paying $6 to a Royal Straight Flush paying $20,000.

Information from the Wizard Of Odds

Let it Ride was among the first of a wave of new casino games to hit the land casinos of the U.S. in the 90's.  It is a simple poker-based game on the poker value of a five-card hand.  No dealer hand to beat, just a pair of tens or better is needed to win.

Unlike most poker-based games where the player can raise his bet after seeing some cards, in Let it Ride the twist is that the player starts with three bets and has two opportunities to pull them back as cards are revealed.

The order of events is as follows:

• The player may pull one bet back or "let it ride."

• The dealer deals the first of two community cards.

• The player may pull one bet back or "let it ride."

• All bets are paid according to the poker value of the final five-card hand and the pay table below.  Wins are on a "to one" basis.  Anything less than a pair of tens is a loser. 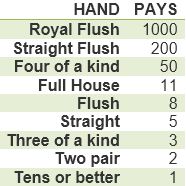 For purposes of this strategy, a "high card" is a ten to an ace.

With three cards you should "let it ride" if you have:

• Any paying hand (high pair or three of a kind)

• Any three to a royal flush

• Three to a straight flush, one gap, with at least one high card.

• Three to a straight flush, two gaps, with at least two high cards

With four cards you should "let it ride" if you have:

• Any four to a flush

• Any four to an outside straight;

• Any four to an inside straight with four high cards

Assuming the player follows this strategy, the house edge is 3.51%.  That means the player can expect to lose 3.51% of a single bet per round.  For example, if the player starts with three bets of $10, his expected loss is 35.1 cents.

Most Let it Ride games have one or two side bets. One type often seen is based on the poker value of the player's initial three cards.  Another is on the poker-value of the final five card hand.  Whatever the case, these side bets invariably carry a much higher house edge than 3.51%.  It is usually in the 10% to 20% range.  Whatever the rules are, I would consider it a sucker bet and stay away. This advice applies to all games.

Of the many poker-based casino games out there, Let it Ride is one of the simpler ones, both in terms of the simplicity of the rules and strategy.  The house edge is in the middle of the road, compared to other table games.  The hit rate on the game is only 24% but sometimes when it hits, it hits big.

If you like a game with a little strategy, but nothing too complicated, and don't put an emphasis on a thin house edge, then you may enjoy Let it Ride.