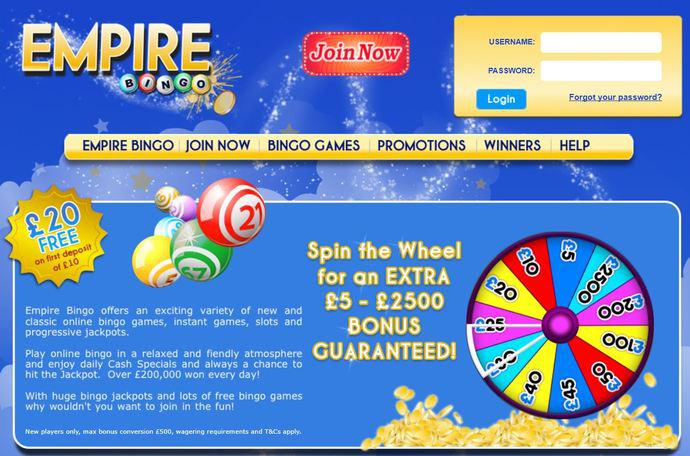 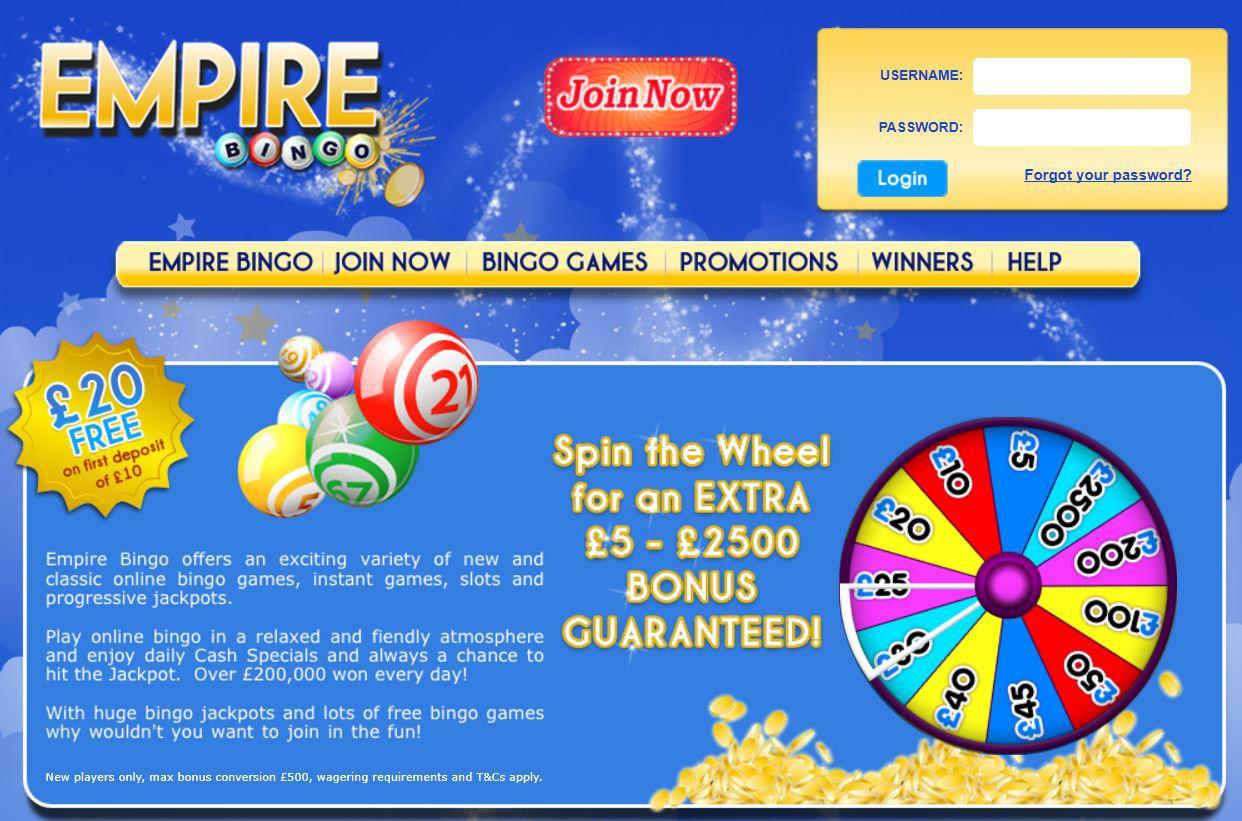 Bingo Empire is no longer available through our site due to unforeseen circumstances. We suggest trying these online bingo rooms.

Bingo Empire has a huge stake in online bingo, with six bingo halls filled with bingo games from 30 Ball Bingo to 90 Ball Bingo, and side rooms packed with progressive jackpots, slots, and specialty games.

With such an expansive grasp on gaming and online bingo entertainment, Bingo Empire sure begs the question as to why online bingo players would want to go anywhere else.

Bingo Empire online bingo is a member of the popular Bingo Entertainment Group and is in the company of bingo powerhouses, like Bingo Gala and Imperial Bingo.

Like its sister sites, Bingo Empire’s software is available via download, and contains not only a powerful online bingo program, but also an impressive selection of blackjack, keno, online pull tabs, slots, and video poker.

Online bingo players looking for free online bingo can fill up their bingo cards at regular intervals for nothing, next-to-nothing, or BOGOF. Deals are for the making every day, you just need to know which rooms and when.

Check out the Bingo Empire bonuses before you start playing. Every one of Bingo Empire’s six halls has a different set of promotions, and to list them all here would not only cut into your precious online bingo play, but would give me a serious hand cramp.

Take my word for it, each room is filled with daily chat specials, pattern specials, free play, cheap play, and other card promotions. Here’s a quick example of what I mean:

You can always expect a reputable online bingo hall like Bingo Empire to come up with enticing welcome bonuses and free cash promotions. Since they are likely to change, we welcome you to check our Bingo Promotions pages as well as directly with Bingo Empire for the latest in free stuff for newbies!

I thought it might be helpful to get a quick breakdown of each of Bingo Empire’s six bingo halls so you know where to direct your energy and your online bingo mojo.

Party 75 and Party 90: By “Party” they mean “Chatty”. Both Party 75 Ball Bingo and Party 90 Ball Bingo are filled to the online bingo brim with unique and entertaining pattern challenges as well as competitive chat prizes.

You wouldn’t believe some of the fun things you get to do to win some extra BBs. The only real difference between the two rooms, of course, is that they play slightly different bingo versions-so pay attention to which side of the pond you’re aiming for!

Chat games are only available in the Party rooms, so if you’re into more focused online bingo, you have four more rooms to choose from:

Bingo Empire has enough online bingo action to keep you coming back again and again; from Blackout Bingo to Half Price Bingo to Progressive Jackpot Bingo.

This review would have taken me much less time to write had I been able to focus on the words instead of constantly checking in on my chat room side bets! (You’ll feel my pain in a minute. Your productivity may suffer, but hopefully your pocketbook will make up for it!).

Bingo Empire online bingo is regulated and licensed by the Government of Netherlands Antilles (Curacao). Bingo Empire does not accept US players at this time.